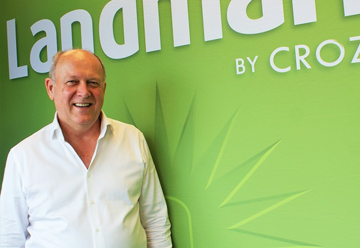 As President of Crozier Enterprises, Winnipeg’s Ken Crozier is responsible for the vision, strategy and development of Crozier’s Landmark, RockCraft and TWSI divisions. His role includes overseeing the day-to-day operations for Landmark and acting as the primary liaison for suppliers.

Ken established Crozier in 1984 as a one-man operation and grew the business to a fully staffed office in downtown Toronto. Fast-forward 32 years and the company has far exceeded his initial vision; becoming a leader in high-end site furnishings and construction castings. With an ever-entrepreneurial mindset, Ken also launched RockCraft, a company offering concrete climbing rocks for bouldering that he designed himself.

Prior to starting Crozier, England native Ken achieved his Bachelor of Commerce Degree and spent several years as a banker in the financial world. He remains active in his community as an alumni member of the local Winnipeg rotary. Ken’s passions include travelling, playing squash and going to the theatre. He and his wife Nancy welcome visits from both their children and grandchildren.

Iain Crozier »
back to top